The Flying Elbow is tucked in among other businesses on North 13th Street in Marshalltown, Iowa. Local business owners support one another by encouraging their customers to stop by a neighboring boutique, restaurant, and/or shop. And it’s clear - Iowa’s Best Burger Contest has not only increased foot traffic at The Flying Elbow, but the adjacent, small businesses. The Flying Elbow, an alternative sports bar, was six years in the making. It did not happen by chance; it is the result of pitfalls and perseverance. Now it’s been named Iowa’s Best Burger.

Goodman’s smashburger features a blend of chuck, brisket and short rib, which is fresh, never frozen and sourced from Midwest cattle. He also incorporates Wagyu beef, raised by a Marshalltown producer, into the mix. Goodman said, “It’s basically a custom blend that nobody else has, and the flavor from the Wagyu took it over the top.” In the end, patrons are presented with a “nice, juicy patty with crisp edges.” Goodman says, “The beef speaks for itself.”

The Flying Elbow sells a lot of the “Real American.” The burger is named after Hulk Hogan’s theme song, and is Goodman’s take on the popular fast food, standard cheeseburger. It features the basic toppings: ketchup, mustard, pickle, and grilled, minced onion, which complement the fresh burger patty. Other popular burgers include: The Brisco, George the Animal, and Tombstone. 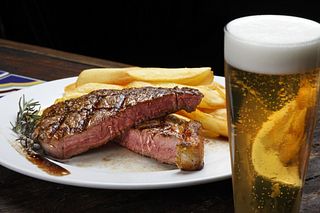 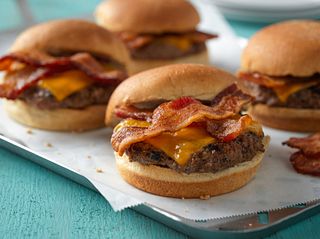 What's not to love about this recipe? Ground Beef patties are grilled and topped with bacon and cheddar. 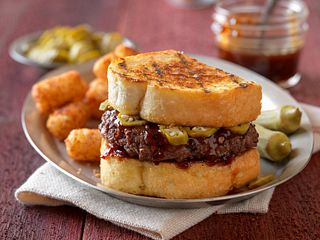 Whip up your own beer-based barbecue sauce, then slather it on a perfectly prepared Ground Beef patty. Serve it up on a slice of Texas Toast. 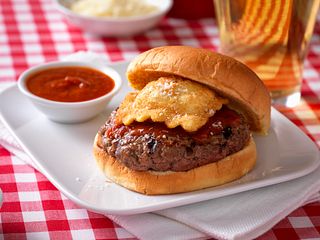